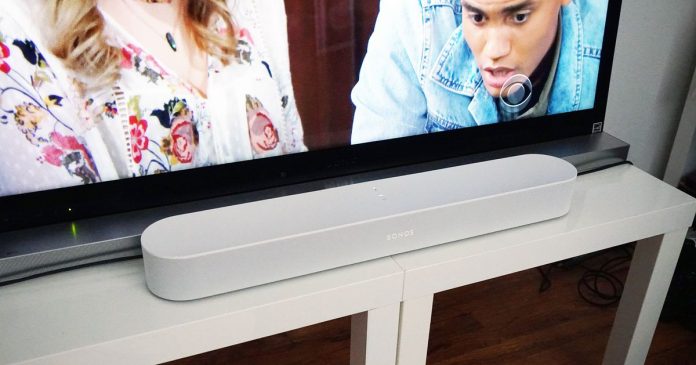 The Sonos Beam is a glimpse at what every soundbar will soon look like: sleek, compact, excellent-sounding, and intelligent thanks to Amazon’s Alexa.

I honestly didn’t think so at first. But after using the Sonos Beam for a couple a weeks, I don’t think I’ll ever consider a soundbar without some kind of digital assistant support.

The $400 Sonos Beam is far from the perfect soundbar, but it hits the sweet spot on price, design, sound quality, and features.

Unlike most soundbars, the Beam is a new breed of soundbar. It’s one of the first to come with Amazon Alexa support, which means it’s more than just a speaker.

With the right connection, it can control your TV, turn on your smart lights, get you the weather, play your music, and more — all with your voice. It’s pretty wild.

I really hate saying a product is “Apple-like,” but the Beam really looks like it was plucked out of Jony Ive’s design lab.

I’ve been testing the white model and as far as home theater tech goes, it’s about as non-intrusive as it gets. Sonos says the compact design makes it easier to fit on smaller media centers and mount either around the TV or elsewhere (ceiling, wall, etc.)

Aside from a couple of ports on the back (power, HDMI, Ethernet), there’s only a couple of touch-sensitive buttons on the top for controlling music playback and volume. There’s also a button for muting the always-listening microphone.

Make sure your TV has HDMI-ARC

Getting started with the Sonos Beam doesn’t take more than a few minutes. You download the Sonos app and once it detects the Beam, it’s just a matter of following a couple of steps, connecting additional Sonos subwoofers or surround sound speakers, and then plugging it into your TV’s HDMI-ARC port with the included HDMI cable.

Your TV needs to have an HDMI-ARC (if it doesn’t say “ARC,” it’s just a regular one) port in order for the Beam to control it. Most TVs released in the last couple of years should have at least one.

If your TV doesn’t have an HDMI-ARC port, you can still plug the Beam into your TV to use it as a regular soundbar via the optical audio port. You just won’t get any of the sweet voice controls, which is kind of the whole point of this product.

Like Sonos’ other speakers, the app also asks if you want to calibrate the speaker’s sound for the room the Beam’s in using the company’s Trueplay speaker tuning. This process adds a couple of extra minutes to the setup process and involves walking around your room and waving an iOS device in the air to “measure how sound reflects off walls, furniture and other surfaces in a room.”

Unfortunately, Trueplay isn’t compatible with Android devices; you need to use an iOS device or borrow one to tune it. Moreover, if you move the Beam to another spot or another room, you’ll need to go through the entire device-waving process again. This funky calibration really made me appreciate the auto-room calibration found in the HomePod.

Sonos is known for its high-quality sound in its Play speakers and Playbar and the Beam is no different.

With a $400 price tag and size, though, you shouldn’t expect the Beam to sound as loud or as clear as the $700 Playbar. So long as you recalibrate your expectations, you’ll either be impressed or disappointed.

Personally, I thought the Beam sounded pretty good for such a compact soundbar. For watching TV, the Beam is a huge improvement over the wimpy speakers built into my skinny flat screen. Rather than blasting sound downwards, the Beam redirected sound towards me.

The Beam is no ordinary soundbar, just shooting sound into your room. Sonos says it tuned the soundbar specifically for both music and TV.

For example, when you’re watching TV, the Beam prioritizes vocal clarity using its center tweeter and twin “full-range” woofers located on each side. While watching The Office, The Simpsons, and Modern Family, I definitely noticed a sharp difference between the Beam and my TV’s built-in speakers. Dialogue is less tinny and fuller-sounding, and simply easier to hear even when the soundbar wasn’t cranked to high volume levels.

However, switch to listening to music and the Beam will pump out a little more bass and warm up the sound so there’s just a bit more stereo separation. I especially noticed the rich bass and wider sound stage on Childish Gambino’s “Summertime Magic.” On my Amazon Echo, the vocals and steel drums are brushed into the background as it tries to pump bass into the foreground.

Ariana Grande’s “God is a woman” sounded equally crisp and pleasing to my ears, balancing the highs and lows much better than on my Echo or TV’s built-in speakers.

At the highest volume, sound from the Beam will become distorted, just like on the $200 Sonos One speaker. But that’s also pretty common for compact soundbars and speakers. The only way to get less distortion is to invest in a speaker with a larger cabinet like the Google Home Max. The Max is a clunker of a speaker, but it brings the bass.

Though I mostly streamed my music from Spotify at the highest bitrate, the Beam also supports audio streaming over AirPlay 2. You’ll need an iOS device or Mac to stream audio from. I didn’t notice much of a difference between streaming Spotify over AirPlay 2 to the Beam versus it pulling music down over WiFi. If anything, music streamed over AirPlay 2 sounded just a little more clearer. But honestly that could have been a placebo after intensely listening to the Beam for a couple of days.

But sound quality is only half the reason to buy the Beam. The other is built-in Alexa. With the Beam and Amazon’s digital assistant, you can actually control your TV. You can issue a voice command like “Alexa, turn on the TV” or “Alexa, increase the volume”, but that’s really all you can currently do in terms of using voice commands in place of your TV’s remote control. I couldn’t change the TV channel or input using Alexa and the Beam. On the plus side, the Beam’s microphones did a good job picking up my voice even over loud-playing music.

You’ll get a little more mileage out of Alexa if you’ve got a Fire TV hooked up to your TV, but the voice commands are limited to the Fire TV input so you won’t get the same features on other inputs.

Though Alexa controls for your TV are limited, Alexa’s many skills still work. So everything form asking for the weather, controlling smart home devices, getting news briefings — all of it still works with the regular ol’ Alexa command.

I was worried at first there would be a power struggle between my Echo, Echo Dot and the Beam, all of which were within only about 10-15 feet of each another, whenever I said an Alexa command, but there never really was one. For the most part, Alexa’s responses usually defaulted to the Beam, which is just how it should work — the TV is the centerpiece.

What Sonos has achieved with the Beam is pretty impressive. The Beam is sleek, compact, sounds really good, and comes with Alexa. At $400, it’s also reasonably priced. There will always be the audiophile who demands more, in which case, the Beam will likely fall short of their high expectations. But for most people, the Beam hits the sweet spot.

Sure, the Beam’s super-limited voice controls for the TV were a bit of a turnoff, but if I were to compare it to the more capable Fire TV Cube, I’d pick the Beam every time. The Fire TV Cube is just too buggy and slow to work reliably. A future version could swing things back in its favor, but the current model.

Much like how HDTVs had to include some kind of smart TV functionality in order to stay relevant, I suspect other soundbar makers will have no choice but to follow in the Beam’s steps and include either Alexa or Google Assistant support in their new devices.

The isn’t perfect, but it might be the simplest way to fully integrate voice control into your living room entertainment center.